Welcome to Brisbane and the 2013 Super League Tournament.

Hockey Queensland is proud to support Brisbane Hockey Association who are hosting this championship and welcomes you to the State Hockey Centre. The next three days promise to showcase the “current and rising stars of hockey in Queensland” as all six zones battle for the title of Super League Champions. With new names to personalise the zones and a fast and furious format to the competition we look set for an exciting time.

This showcase won’t only be limited to the on-field skills and excitement of the players but will also feature the expertise and passion of team coaches, competition officials, umpires and volunteers. Hockey Queensland and Brisbane Hockey Association have also taken this opportunity to enhance the footprint and profile of the competition through initiatives designed to engage the local players, community and supporters to attend as spectators. Other combined activities include a penalty shoot out competition, oldies versus youngies exhibition match and an official social function on Sunday evening. And finally in partnership with HockeyZone we will be live-streaming the final day’s matches through the Hockey Queensland website.

On behalf of the Hockey Queensland team I’d like to encourage you to get involved in the excitement of the event and enjoy Brisbane hospitality. I’d like to extend my appreciation to the organising committee Brisbane Hockey Association, the Tournament Directors, umpires and officials, competing teams and their supporters and the army of volunteers who make the event possible.

I would like to wish players from all zones good luck and look forward to the games being played in the true spirit of the competition.

Following on from the success of the inaugural Super League tournament held last year, we are expecting that the 2013 Super League will be even better with exciting matches and plenty of fun for all involved. We are particularly excited about the inclusion of team names for this year’s Super League which will enable the development of team identities for the future.

In addition to competitive and high quality hockey games, everyone has the opportunity to compete in Hockey QLD and BHA’s Super Star Challenges. I encourage you to get involved in the Penalty Shoot-Out Challenge on Saturday and then test your speed in the Drag Flick Speed Challenge on Monday.

“Super Sunday” will be a notable day with the scheduling of an Exhibition Match which will see a group of young up-and-coming stars go up against a team of Brisbane’s experienced hockey minds. This will act as a curtain raiser to the 2012 Women’s Grand Final rematch—Brisbane Blitz versus Wide Bay Thunder. Play finishes early for all to attend the Official Tournament Function.

Hockey Queensland would like to acknowledge that despite the unavailability of several quality players due to National Junior World Cup commitments, each Zone has fielded a strong competitive team. It is a testament to the hockey community of Queensland that we are still able to field 12 exceptional hockey teams for the tournament, regardless of these scheduling clashes.

Let’s all enjoy some fantastic hockey over the next three days, and let the best Zone win!

Have you seen the latest Just Hockey catalogue? 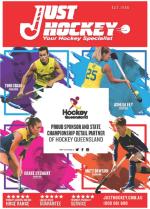