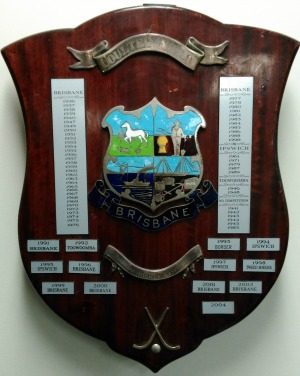 The Coulter Shield (pictured) was presented by the Brisbane Hockey Association for competition between Brisbane, Ipswich, Toowoomba, Warwick and Dalby in honour of Mr Eric Coulter, who was the first Secretary of the Brisbane Hockey Association. After five years as Secretary, Mr Coulter became President, a position he held when the Shield was made available for competition in 1938. Mr Coulter then went on to hold the position of Patron of the Association (BHA) and became its first Life Member.

More research is required but it appears that originally the Country Centres played firstly for the Dunbar Pennant. The winning City had then earned the right to challenge Brisbane for the Coulter Shield.
[This fact to be confirmed - anyone?]

The following table lists the winning Cities to 1976. More outcomes may be added to the list, time permitting.

In 1936, an attempt was made to inaugurate a competition for Colts (U21) from centres playing for the Dunbar Pennant. However, the move was not successful.

The proposal was re-introduced in 1938 and a competition for Colts was conducted between teams from Warwick, Toowoomba, Dalby and Ipswich.
Mr Powell G Heuer was Vice President of the Toowoomba Hockey Association and offered to donate a Cup for the new competition which was accepted. He was President of that Association in 1939-40.

The following table lists the winning Cities to 1975. More outcomes may be added to the list, time permitting.